BOSCO is an acronym for "Bangalore Oniyavara Seva Coota" "the Organization of those who serve children at risk",.

2.Mission
BOSCO attempts to encourage the young at risk to join the mainstream of society as educated and productive citizens. It achieves this by partnering with the children in the daily struggle to grow off the streets and become socially contributing and economically independent young individuals. 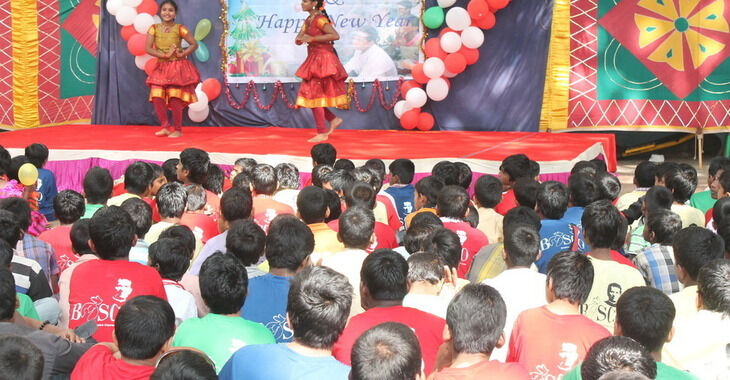 About 700 children, friends and well wishers of BOSCO gathered together today on 30th January 2016 at BOSCO Mane to celebrate the Birth Bicentenary of Don Bosco, to share the joy of the national child welfare Award 2014 the organization received. His Grace Rt. Rev. Dr. Bernard Moras, the Archbishop, Archdiocese of Bangalore graced the occasion and conveyed the words of blessing on the occasion. Shri. K. J. George, Honorable Minister for Bangalore Development and Town Planning, Shri. G. A. Bava, KPCC Secretary and Smt. Kokila Chandrashekar, Corporator, Chamarajpet Ward – 140 and Rev. Fr. Joyce Francis SDB, the Provincial, Province of Bangalore presided over the function.

In the inaugural function Fr. Mathew Thomas, Executive Director of BOSCO gave an overview of BOSCO over the years. He shared the joy of the prestigious National Child Welfare Award 2014 BOSCO received recently for its service in the field of child care and protection. “BOSCO Bangalore has rescued 1 lakh twenty thousand children last 35 year. It is from Saint Don Bosco, whose birth bicentenary we celebrate today, the organization drives its inspiration to fulfill this great task. National level recognition reminds us of our commitment to the cause of young at risk”, he said.

The Birth Bicentenary celebration of Don Bosco was officially inaugurated by Honorable Minister K. J. George. Speaking on the occasion he admired the service rendered by BOSCO for the rescue and rehabilitation of children from the streets of Bangalore. “BOSCO’s efforts have explicitly made it clear that given an opportunity to grow up in an atmosphere of family with facilities to develop personal talents, all these children from street will become constructive citizens of our nation”, he said. He also thanked BOSCO for giving them an opportunity to come off street life and build future for them. opined the minister.

Speaking to the gathering, His Grace Rt. Rev. Dr. Bernard Moras, The Archbishop, Archdiocese of Bangalore invited everyone to join hands in creating conducive atmosphere for children to grow up enjoying their rights at home, in school, public places and in society at large.

BOSCO’s recent study titled ‘Quest for Change: A Glance at the realities of Run Away Children’ was released during the occasion by the Archbishop and Shri. G. A. Bava. The book explores each aspect of the problem of runaways and analyses the factors causing children to run away from home, the problems these children face in the streets and also their reintegration with the family. The book was written in the context of lowering the age of Juvenile offenders to sixteen and trying them with adult offenders.
The day witnessed the competitions of children from BOSCO centres and areas to honour Don Bosco the saint of the streets. The winners were awarded with certificates and trophies.