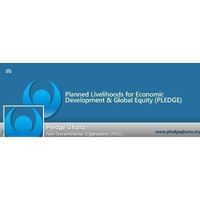 Pledge Ghana is an acronym for Planned Livelihoods for Economic Development and Global Equity. This is a gender/child-centered, economic/development-oriented, research-base non-profit non-governmental organization formed in Ghana. Pledge Ghana is established to provide a collaborative and coordinated response to build, promote and sustain household livelihoods

The administration of the organization is grouped under two divisions; the Operations Division and the Finance Division both headed by Directors. Directly under these divisions are four departments; the Projects Department, Public Relations Department, Accounts Department and the IT Department. These departments are all staffed with qualified and competent professional men and women in their respective fields. In all, there are 4 females and 5 males on the staff list of Pledge Ghana. We also enlist the services of consultants in good standing as and when the need arises.

At the base of the structure is a volunteer system that consolidates the agency’s efforts through cash or kind assistance services rendered by benevolent individuals and organizations including community stakeholders.