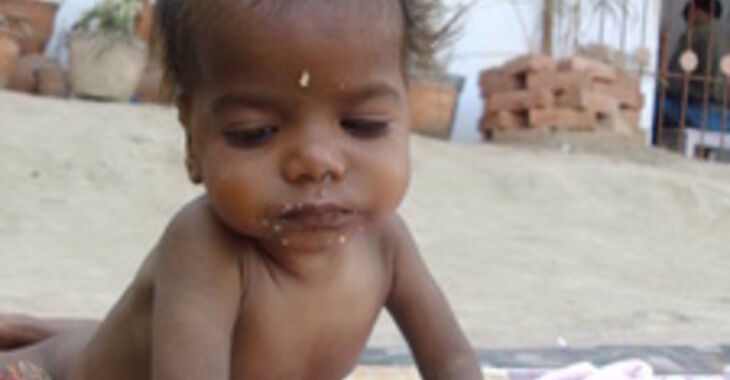 Vishwas and Vishnu are two year old twins, who we know since theri birth on the streets of Varanasi. The mother is malnourished herself and a beggar and the father is a cycle-rickshaw driver. The twins have been sick and malnourished since birth and the list of illnesses they have already encountered in their short life, is long: Pneumonia, Bronchitis, Worms, Maggots in their ears, Diarrhoea and several infections. They are two years old now with a developmental age of 3-6 months old babies. They only weigh about 4 kg and up to a month ago, Vishnu could barely lift his head for more than a couple of seconds.

Since one month they not only attend school every day but also stay in the hostel until the evening. There they get nutritional food and are looked after by the other kids, staff and volunteers until their parents pick them up for the night.

Within this last month they’ve changed immensely. Vishwas is starting to pull himself up and already walks with support and Vishnu who’s always been the smaller and weaker of the twins, can pull forward on his tummy now and is getting more alert by the day.

We’d love to give them the opportunity to stay with us and need your help to do so approriately. Don’t worry, we won’t kick them out on the streets if you don’t donate! :-D

1. Both kids get ‘Ensure’, which is gluten and lactose free food, that is also very stomach and bowel friendly. This is given as a supplement to their usual diet. 2kg of ‘Ensure’ last for three weeks and cost 24 euros.

2. Disposable nappies: The twins diarrhea won’t vanish that quickly as their stomachs are very weakened and they still live (sleep) on the street. However, the frequency of their diarrhea has improved already. We urgently need disposable diapers for school and hostel, as they’ve been pooing all over the staff and kids alike and that’s so against our hygiene policies- obviously! Diapers would also be helpful when we take them on excursions. So far we’ve used washable diapers but they don’t really work with diarrhea…100 diapers will cost 15 euros.