The Street Children Project (SCP) was founded by the Catholic Archdiocese of Kumasi in 2005 to address the problem of children on the streets of Kumasi. Street Children Project is managed by the Daughters of Charity of St. Vincent De Paul working with dynamic staff members and volunteers. The current director is Sister Olivia Umoh. The Project provides multifaceted services to children in street situation, which include counselling, family reintegration and financial and other support in education and skill training. Currently SCP supports over 300 children in education and skill training.
Our services include street workers reaching out to children on the street, a Drop-in Centre where street children can rest, relax, play and join informal education, a Day Care Centre for the young children of street mothers and poor marketwomen and a Vocational Training Centre where former street girls are provided with employable skills, literacy programmes and much more. 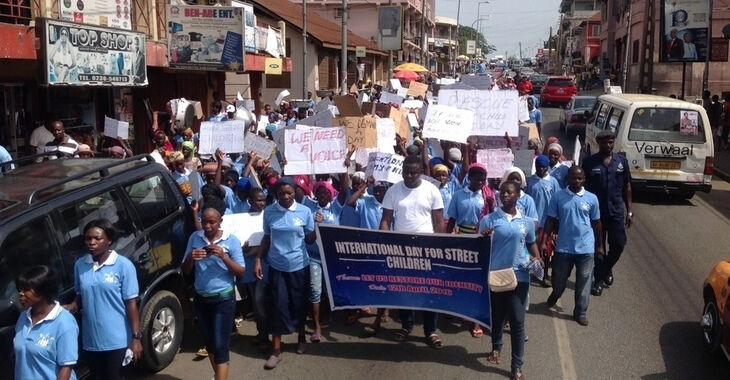 After a long and tiring walk through the designated streets of Kumasi. The children who participated in the float were treated to food and drinks to help replenish their lost energy.

Street Children Project is ever grateful to Adamfo Ghana Netherland for raising funds to bear the cost of the International Day for Street Children. We are equally grateful to the Daughters of Charity Province of Nigeria who also supported the funding of this occasion.