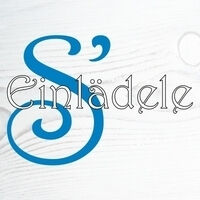 
S’Einlädele, founded in 1991, is approved as non-profitmaking and charitable by the taxation office. The establishment is led as an independent, non-profit organisation (gGmbH) operated by the “Evangelische Stadtmission Freiburg”, Germany.


“S’Einlädele” runs two shops in Freiburg in which everything can be found: essentials, rarities, antique valuables and beautiful things as jewelry, homewares, tableware, well-preserved clothes, shoes, dessous, toys, postcards, books, CDs, paintings etc. Besides, coaching and pastoral care is offered by skilled employees.
Both humanitarian projects established in the Ukraine, such as “Father’s House” and social-diaconal organisations, and people who have got into difficulties are supported by the amount realised, after the deduction of administration costs (employees, shop-, coaching- and office rooms, storehouse for relief supplies, transport fleet).


During the last years S’Einlädele’s exemplary work has been awarded several times. Inge Kimmerle, foundress and long-term manager of the organisation, accepted the honours vicariously.
- Projektpreis der Evangelischen Landeskirche, 1996
- Medal of the order of Merit of the Federal Republic of Germany, 2002 in Stuttgart
- Conferment of the European “Regio-Kulturpreis” (Pro Europa) for engagement in international understanding, 2007 in Freiburg
- Medal of Merit of Baden-Württemberg, 2011

Ukraine-aid
After the disintegration of the Soviet Union in 1991, Ukraine has become independent and has been trying to get economically on firm ground again which has not been successful so far because of corruption and mismanagement. Therefore, the country still urgently needs help from abroad.

Since 1993 S’Einlädele has given humanitarian aid in the Ukraine. The aid is based on the following principles: direct, specific and and precise, carrying the disposition “help to self-help”.

Several times a year a team of “S’Einlädele” flies in the Ukraine to survey the taken supporting measures and to work out precise steps for the development and establishment of projects with the people in charge. A close, trustful and continuous relationship to the employees of the organisations is significant for the “Ukraine-aid”. Some of the projects are interrelated and assist eachother financially and practicably.

All projects are financed by donations. The organisations in the Ukraine are provided with necessary commodity contributions given by German companies, communities, social organisations, families and single persons.

Every six to eight weeks a 40- ton- lorry is sent to the Ukraine. The collection in Germany takes place with a lorry belonging to S’Einlädele. In 2012 the lorry won’t get a license any more so that the organisation needs a new one and looks for a sponsor.

Some of the projects which have been established by S’Einlädele and are supported continually with financial donations and commodity contributions:
- establishment and maintenance of 3 residential homes in Kiev and Shitomir in which about 80 children live in a family-like atmosphere, raising up according to their age and getting adequate professional care. The children are orphans, half-orphans or derive from a difficult family background. In the last years over 180 former waifs could be released to begin an independent life, some of them go to university today.
- Establishment of an agricultural farm (about 200km far from Kiev); part of its profit is given to “Father’s House”
- Construction of a house including a bakery which delivers several schools. The complete furniture of the bakery was donated by a German bakery owner
- Construction of a home for elderly homeless or needy people
- Furnishing of a hair salon
- Sponsorship- project for children in the residential homes (at the moment 22 sponsorships)
- Humanitarian transporst of relief supplies (8-10 a year)
- Continuous support of families, single persons, elderly people and communities/ churches???

On top of this, several extra campaigns in support of the aid projects are realised by S’Einlädele throughout the year:
- Lent-campaign: “Brich dem Hungrigen dein Brot”
- School-bag- campaign for Ukrainian children
- Christmas presents for children, poor families and elderly people in the Ukraine
- Benefit concerts with the Kiev Brass-Quintett, a professional emsemble that can be booked in Spring and Winter when it stays in Germany

”S’Einlädele“, founded in 1991, is a small Christian aid organisation belonging to the “Evangelische Stadtmission Freiburg”, Germany.
On top, 10 lorries a year with humanitarian aid go into the Ukraine. 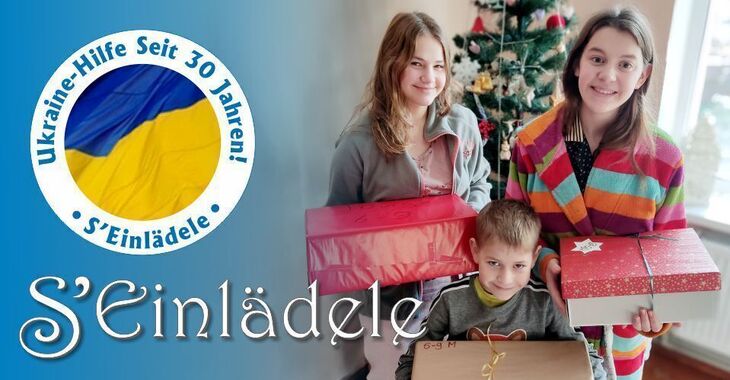