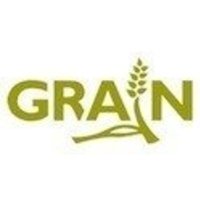 GRAIN is a small international non-profit organisation that works to support small farmers and social movements in their struggles for community-controlled and biodiversity-based food systems. Our support takes the form of independent research and analysis, networking at local, regional and international levels, and fostering new forms of cooperation and alliance-building. Most of our work is oriented towards, and carried out in, Africa, Asia and Latin America.

GRAIN's work goes back to the early 1980s, when a number of activists around the world started drawing attention to the dramatic loss of genetic diversity on our farms – the very cornerstone of the world's food supply.

We began doing research, advocacy and lobbying work under the auspices of a coalition of mostly European development organisations. That work soon expanded into a larger programme and network that needed its own footing. In 1990, Genetic Resources Action International, or GRAIN for short, was legally established as an independent non-profit foundation with its headquarters in Barcelona, Spain.

By the mid-1990s, GRAIN reached an important turning point. We realised that we needed to connect more with the real alternatives that were being developed on the ground, in the South. Around the world, and at local level, many groups had begun rescuing local seeds and traditional knowledge and building and defending sustainable biodiversity-based food systems under the control of local communities, while turning their backs on the laboratory developed 'solutions' that had only got farmers into deeper trouble. In a radical organisational shift, GRAIN embarked on a decentralisation process that brought us into closer contact with realities on the ground in the South, and into direct collaboration with partners working at that level. At the same time, we brought a number of those partners into our governing body and started regionalising our staff pool.

By the turn of the century, GRAIN had transformed itself from a mostly Europe-based information and lobbying group into a dynamic and truly international collective — functioning as a coherent organisation — that was linking and connecting with local realities in the South as well as developments at the global level. In that process, GRAIN's agenda shifted away from lobbying and advocacy much more towards directly supporting and collaborating with social movements, while retaining our key strength in independent research and analysis.

GRAIN is an organisation that represents no one but itself. However, it is through collaboration and partnerships that we link in with local and national realities and play a meaningful role in our information, research, advocacy and networking activities, be it in the regions or at international level. In fact, we work with many groups in different parts of the world to produce and disseminate collaborative publications and analyses, and engage in other collaborative projects.

The land grabbers of the Nacala Corridor

A. Urkiola  25 February 2015 at 11:43 AM
Peasants in northern Mozambique are struggling to keep their lands, as governments and foreign companies move aggressively to set up large-scale agribusiness projects. They are being told that these projects will bring them benefits. But, so far, the country's experience with foreign investment in agriculture has been disastrous.

A new survey by Mozambique's National Farmers' Union (UNAC) and GRAIN shows there is a colonial-style scramble for Africa's farm lands under way. Politically-connected companies based in offshore tax havens have grabbed hundreds of thousands of hectares of farmland from peasants in Mozambique. (Download an Excel spreadsheet.)

This report looks at the companies already setting up agribusiness operations in the Nacala Corridor, an area that the government has prioritised for agribusiness development. These companies, typically structured through offshore tax havens and often connected to Mozambican political elites, have been grabbing lands and extracting wealth in ways reminiscent of the country's colonial days.
continue reading