School Fees for the Children for 2016

Back to the fundraising event

Born
in 2003 as the first born to her parents, Shamim is one of the children
that were formally on the streets due to harsh living conditions. Her
father divorced with their mother in 2007 during which period the mother
had a long illness and he left for Juba in Southern Sudan and has never
returned.

This was the beginning of agony for the family since the mother was
ill, lacked food and other basic needs. Shamim and her sister became too
vulnerable resulting into joining Mbale streets in search for survival.
While on the streets, she met one of her mother’s friends whom she used
to work with – selling porridge - before she became sick. This lady
took her on and engaged her into distributing porridge to her customers
in the morning as well as evenings for which she was paid a meager UShs
100 at the end of the day which was even not worthy an average meal.

Besides the meager earning and involvement into child labor, Shamim
at such a childish age – was subjected to torture as she collected the
cups from customers through abuse and insults.

As the mother recovered, she resumed her porridge selling business in
which Shamim had to be involved still since the mother was still weak
and hence still missed the opportunity to attend to school. She
continued to sell porridge with her mother in the bus park in Mbale town
in addition to fetching water for people operating kiosks within the
area.

“I used to carry hot porridge in a jerry can round the lorry park
and one time as I was making cup for the customer ,porridge poured onto
my leg….haaaaaaa” ,with tears rolling down her eyes, “it was so painful” Shamim painfully narrates.

CRO social workers met Shamim at the Mbale bus park in 2009 while
busy selling porridge. At first she feared talking to them but through
encouragement, she opened up. She looked thin, weak due to poor feeding
and behaved wild as a result of verbal abuse and harsh living
conditions. Shamim had wounds and scars all over her skin and looked
unhealthy.

She accepted invitation to CRO Mbale center for counseling and
medication. Her family was visited and assessed only to discover
alarming living conditions liking sleeping badly on a torn mat and
covering herself with a thin old fabric that couldn’t keep her warm at
night. 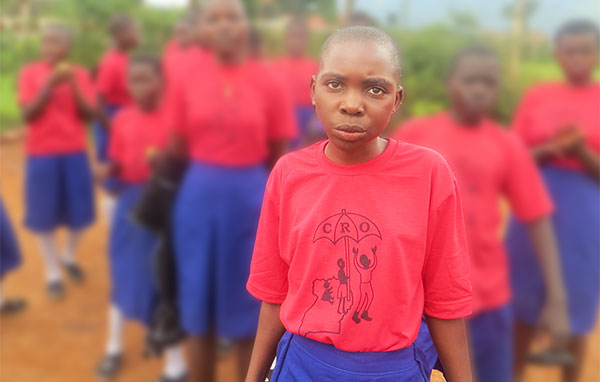 Shamin was enrolled into the rehabilitation class for further counseling which she successfully completed and joined Primary education in Primary 3. Her progress has
been well and her mother works in peoples’ gardens to get a living
after losing all her porridge business capital.

She cheerfully says “At CRO I feel happy and transformed, I enjoy
playing handball and singing”. Shamim is a choir member both at her
school as well as at CRO. “I am grateful to CRO for what it has done for
me and study so hard to become a teacher when I grow up”, Shamim
speaks.

Many children like Shamim are being rescued from the street and helped get back to school as well as rebuild their lives morally, socially and spiritually by Child Restoration Outreach.