In Maputo, capital of Mozambique appeared in October 2010 a Pro Hip Hop Movement, dedicated to the promotion of Hip Hop culture. Called IRMANDANDE – Consolidando o Movimento Hip Hop (consolidation of the Hip Hop Movement), the crew us made of rappers groups living in the Central Neighbourhood of Maputo, namely the crews Alizé, Bairro Negro and Mhuyve Records.

The term IRMANDADE, which can be translated with Fraternity, has already been used for at least 4 years but it only referred to a bunch of friends who shared the same ideals of Peace, Fraternity, looking for knowledge, civil and moral re-education through Rap music, without leaving aside the good old political-social critics.

The IRMANDADE members positively criticize and look for a different socio-economical development of an always more “globalized” Mozambique. They rap about betting on education, local cultural wealth, need to fight corruption, about growing criminality, unemployment, coming with new ideas about how to live in a different Mozambique.

Since the 24th of October 2010, these friends have organized and produced a bunch of shows called "Shows Beneficientes da Irmandade". (Charity Shows of the Irmandade). This beneficiary shows aim at receiving individual or institutional donations that are then re-orientated mainly to the International Red Cross as well as to local charities organizations. Ideally, each spectator/participator brings a food, a scolar or a cloth item to assist to the Show.

Simultanously, the Hip Hop culture of the Periphery of Maputo is promoted in an outdoor scene in the center of the city. 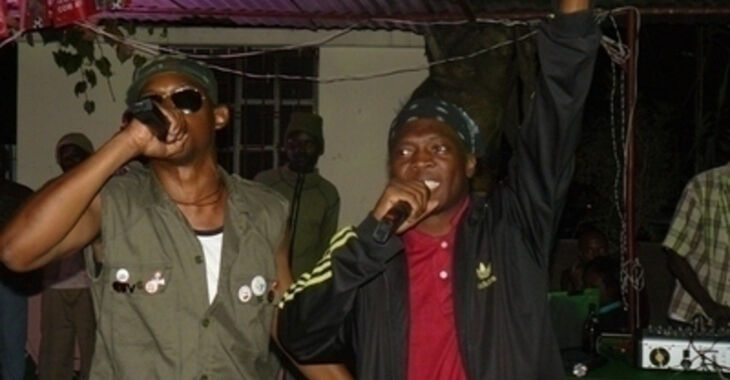 As told on the last post, the Irmandade finally made it up to produce T-Shirts!

With the contribution, 30 T-shirts have been produced and sold within 3 days. With the money from the sales, the Irmandade has now enough to organize a new show, and will continue to produce T-Shirts in the future.

Thanks to the Batique project, to Philip Boehm and to the other donators, the Irmandade has been able to launch a profitable project to expand its image and create a source of income in order to organize more shows, and obviously, to get more donations!