Reggae For A Cause 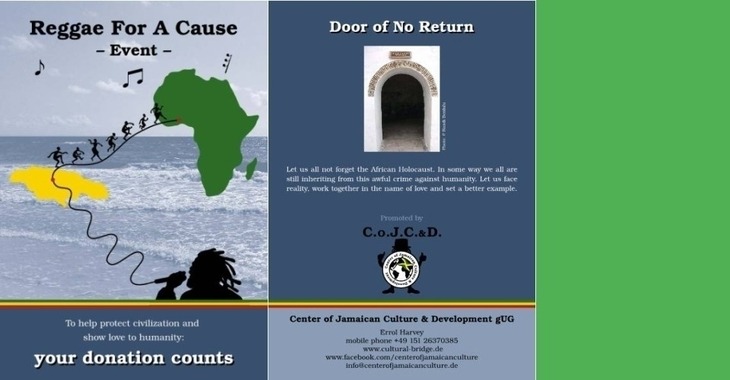 Reggae For A Cause

The purpose of “Reggae For A Cause” is to pave the way for poor descendants of slaves to make a journey back to Africa to learn more about their roots, the culture of their ancestors and visit places like Cape Coast Castle, Elmina Castle..

The majority of Jamaicans are descendants of African slaves who where captured and brought to the island in the 17th and 18th century.

The purpose of “Reggae For A Cause” is to pave the way for poor descendants of slaves to make a journey back to Africa to learn more about their roots, the culture of their ancestors and see the places where they were imprisoned before they were crammed together on the slave ships and brought across the Atlantic Ocean to America and the Caribbean. It will help them to define who they are and reinforce their identity and dignity.

For the beginning the first destination will be Ghana in West Africa to visit places like “Cape Coast Castle”, “Elmina Castle” and “Fort Christiansborg” also named as “Door of no return”.

Step by step it is planned to extend the project throughout the Caribbean and more African countries where once black people were taken from and forced into captivity.

The “Center of Jamaican Culture & Development gUG” will set up an office in Jamaica to deal with the necessary formalities like acquisition of travel documents, booking of flights etc. Road managers will bring the group for the journey together. Those who are living below poverty level will be in first line.

The “C.o.J.C.& D.” will get in contact with the Government of the Republic of Ghana and ask for locations to put on reception events and to set up a “Restoration Center” for accommodation and sustenance of the vacationers. Each vacationer will stay for two or three weeks according to the raised donations for fulfilling this moral issue. First one flight per month is planned, from Montego Bay, Jamaica Sangster International Airport“, nonstop to Accra, Ghana Kotoka International Airport.